Warning: "continue" targeting switch is equivalent to "break". Did you mean to use "continue 2"? in /homepages/6/d91588812/htdocs/hornit/elihorn/blog/wp-content/plugins/jetpack/_inc/lib/class.media-summary.php on line 69

Warning: "continue" targeting switch is equivalent to "break". Did you mean to use "continue 2"? in /homepages/6/d91588812/htdocs/hornit/elihorn/blog/wp-content/plugins/jetpack/_inc/lib/class.media-summary.php on line 79

Warning: count(): Parameter must be an array or an object that implements Countable in /homepages/6/d91588812/htdocs/hornit/elihorn/blog/wp-includes/post-template.php on line 284

I’m still working out login issues, so thanks for your patience. As always, use the form field on the right side of the page to sign up to get these updates delivered to your inbox!

Thanks for all of your prayers on Wednesday. Eli did a great job as expected and the surgery went well. They were able to remove the broken port (with a lot of effort as there was a lot of scar tissue surrounding it they had to get it loose from) and insert the new one into the same ‘pocket’ rather than putting it on the other side of his chest. The only real difference is that this line is feeding into his jugular vein as opposed to the subclavian vein that it was in before. Ultimately both leading to the heart of course, so it’s really just a matter of surgeon preference.

Here is a picture of the port once it was removed: 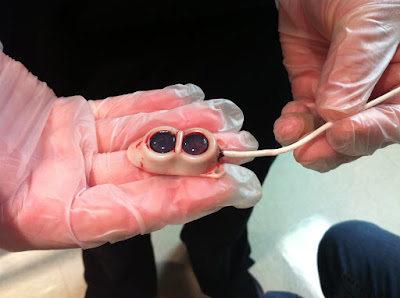 And here is a picture that more clearly shows the ‘crack’ in the line that was the source of the problem: 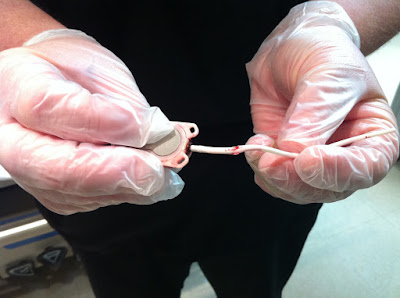 Unfortunately, Eli is feeling pretty sore and even spiked a fever today, which meant a trip back into the clinic for cultures to be drawn and a dose of antibiotics given through his new port. Eli had to be accessed in his new port, which was still very sore from surgery, with no time for numbing cream. He has been a real champ through all of this. They decided to let him go home rather than keep him inpatient, which was nice, but if he spikes another fever over the weekend, we’ll have to go back in. Here is a picture of his incisions: 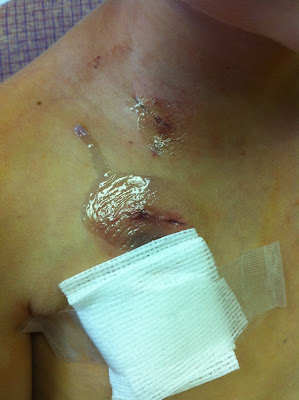 So, we’ll be trying to take it easy this weekend and hope for his counts to come up a little bit as he is still neutropenic (aka, susceptible to an infection at the slightest irritation.) The hardest part will be the ‘no swimming for two weeks’ rule as his incision heals. You can see from the above picture that he has a sort of glue (durabond) over his incision, but it’s also stitched on the inside and sutchered on the outside in addition to the glue. Hopefully it will heal up nicely. Again, thanks for all of the prayers!

This entry was posted in Update. Bookmark the permalink.

One Response to New Port!